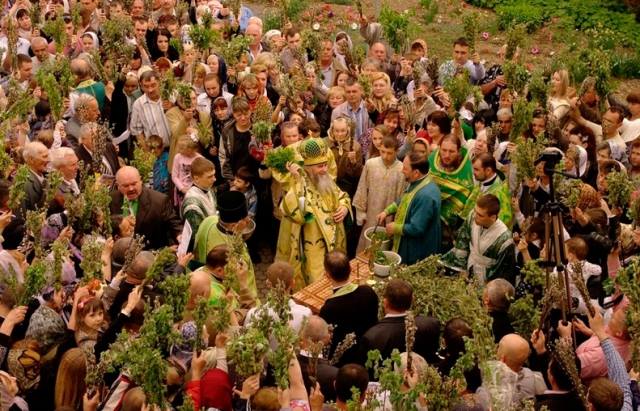 After the pussy willow branches have been blessed by the church, people tap friends, family and passers-by with the branches for strength, happiness and health.

The catkins were swallowed as a precaution against fever and sore throats. They were also mixed into kasha (porridge) in the belief that all the willow’s spring potential and energy would pass into the person.

After the blessed willow is brought home, the branches are placed behind the icons hanging on the walls, to keep away unclean, evil spirits). The branches are also planted in the garden. If the willow takes, the young folks of the family will marry and be healthy. They were also carried around the home, barn and beehives to ensure fertility of the animals and a good yield of honey. Water wells were surrounded by willows to protect them from evil powers, and to ensure that the water remained pure and strength-giving.

The verba’s branches and roots represent the ancestors and the family tree. It was also believed that the willow is the sky holding up the sun. Because it grows so quickly, it was believed to have magical properties. Thus willow pieces were placed in the water in which a pregnant woman was bathed.

Не я б’ю — верба б’є,
За тиждень — Великдень,
Будь дужий, як вода,
А багатий, як земля!
I do not tap – it is the willow that taps,
Easter comes in one week,
Be strong as the water
And rich as the earth!