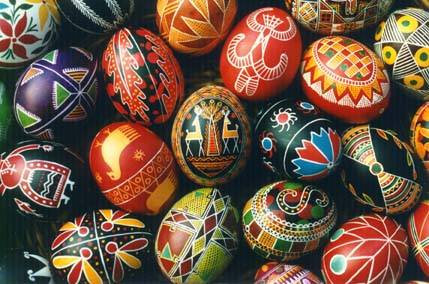 A pysanka is a Ukrainian Easter egg, decorated using a wax-resist (batik) method. The word comes from the verb pysaty, “to write”, as the designs are not painted on, but written with beeswax. Pysanky are typically made to be given to family members and respected outsiders. To give a pysanka is to give a symbolic gift of life, which is why the egg must remain whole. Furthermore, each of the designs and colors on the pysanka is likely to have a deep, symbolic meaning. Traditionally, the designs are chosen to match the character of the person to whom the pysanka is to be given.

At one time, in a large family by Maundy Thursday 60 or more eggs would have been completed by the women of the house. (The more daughters a family had, the more pysanky would be produced.) The eggs would then be taken to the church on Easter Sunday to be blessed, after which they were given away. Here is a partial list of how the pysanky would be used:

One or two would be given to the priest.
Three or four were taken to the cemetery and placed on graves of the family.
Ten or fifteen were given to children or godchildren.
Ten or twelve were exchanged by the unmarried girls with the eligible men in the community.
Several were saved to place in the coffin of loved ones who might die during the year.
Several were saved to keep in the home for protection from fire, lightning and storms.
Two or three were placed in the mangers of cows and horses to ensure safe calving and colting and a good milk supply for the young.
At least one egg was placed beneath the bee hive to insure a good harvest of honey.
One was saved for each grazing animal to be taken out to the fields with the shepherds in the spring.
Several pysanky were placed in the nests of hens to encourage the laying of eggs.

Everyone from the youngest to the oldest received a pysanka for Easter. Young people were given pysanky with bright designs; dark pysanky were given to older people.

A bowl full of pysanky was invariably kept in every home. It served not only as a colorful display, but also as protection from all dangers. Some of the eggs were emptied, and a bird’s head made of wax or dough and wings and tail-feathers of folded paper were attached. These “doves” were suspended before icons in commemoration of the birth of Christ, when a dove came down from heaven and soared over the child Jesus.